Below are the most up-to-date press releases & media coverage from American Hydrotech. Click on a headline, thumbnail or "Read More" link to continue reading or to save a PDF copy to your computer. If you have any questions or would like to request more information, please contact our Customer Service department. 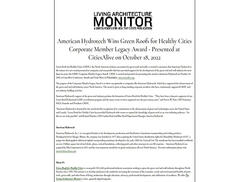 Green Roofs for Healthy Cities (GRHC), the North American industry association for green roofs and walls, is excited to announce that American Hydrotech is the winner of a new award presented to companies and non-profits that have provided support for the development of the green roof and wall industry for more than ten years: the GRHC Corporate Member Legacy Award!

Read more about the award here. 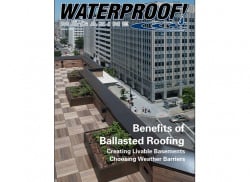 John Hamati, director of technical services for American Hydrotech Inc., says the term ballast often refers to stone as the ballast, but it’s not necessarily exclusive to stone. “A ballasted roof will have the membrane installed first onto the approved substrate, then followed by the XPS Styrofoam insulation and then the proper overburden,” Hamati says. XPS Styrofoam insulation is a closed cell polystyrene that is highly moisture resistant. Placing it on top of the roofing membrane offers protection from the harsh roof environment. American Hydrotech only uses XPS in their assembly as it can resist moisture.

The very best in waterproofing and expansion joint technology can now be warranted together for up to 20 years!

Hydrotech is pleased to announce that when Emseal’s RoofJoint product is used in conjunction with Hydrotech’s Monolithic Membrane 6125® (MM6125®) waterproofing/roofing membrane, Hydrotech can provide a true single source Watertightness Warranty for up to 20 years! No other hot rubberized asphalt supplier can offer this warranty! 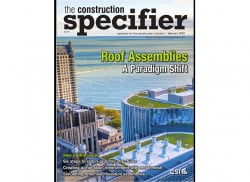 In roofing assemblies for low-slope concrete roof decks, Protected Membrane Roofs set the bar for cost savings, labor efficiency, and roof life span among other advantages. These, advantages may appear counterintuitive: common sense suggests the roof's waterproofing covering needs to be on top, protecting all the other components of the assembly from the elements of nature, including the insulation. Nonetheless, the primary moisture barrier (or waterproof roof covering) itself tends to be the weak link when exposed to environmental stress. 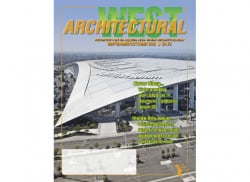 SoFi Stadium, home of the Los Angeles Rams and Los Angeles Chargers, is the first indoor-outdoor stadium to be constructed and is currently the NFL’s largest, at 3.1 million sq.ft.  The $5 billion stadium can seat a maximum of 100,000 guests, and includes 12 club spaces, a 6,000-seat performance venue, a 2-1/2 acre covered outdoor plaza, and a dual-sided elliptical video board with integrated sound system.  SoFi stadium utilizes a unique single-layer ethylene tetrafluoroethylene roof, which is a highly transparent extruded film that is just 1% the weight of glass.  The massive venue is truly a one-of-a-kind stadium, thanks in large part to the materials that were used to build it. 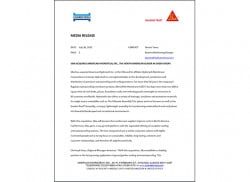 Sika has acquired American Hydrotech Inc. in the USA and its affiliate Hydrotech Membrane Corporation in Canada. With this acquisition, Sika will become the number one supplier of green roofs in North America.  Through this acquisition Sika gains a new growth platform with the expanded offering of complete roofing and waterproofing systems. The two companies have a similar corporate culture with highly motivated people and a strong focus on sustainable, reliable, long-lasting, solutions and customer relationships, and therefore fit together perfectly. 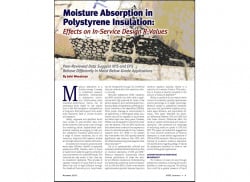 Moisture absorption is a familiar concept. It is easy to understand moisture absorption mechanisms in polystyrene insulation. Unfortunately, some insulation-performance claims can be misleading when based on test results from a few field samples or extrapolations of long-term field performance from small-scale laboratory tests of limited duration and exposure.
Ideally, engineers and specifiers would have access to peer-reviewed data from known scientific institutions to sort through the marketing claims. Sophisticated mathematical modeling is emerging to help predict polystyrene insulation performance in a range of climate conditions, but in the meantime, long-term field research studies are the best resource for reliable information.
This article originally appeared in the November 2020 issue of IIBEC Interface.
Full Article ››
New Raiders Stadium
Thu, 10/01/2020 - 12:00
Published by:
Architectural West Magazine
Allegiant Stadium Scores a Touchdown in Las Vegas, Nevada 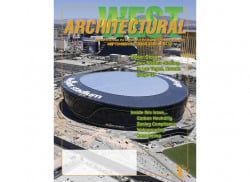 A new landmark sits just west of the global tourist attraction, the Las Vegas Strip in Nevada.  A 1.8 million sq.ft., 65,000-seat domed stadium, costing nearly $2 billion is the new home of the Las Vegas Raiders.  Southern Nevada residents, as well as global sports spectators, have eagerly awaited the completion of the amazing new stadium.  Eberhard Southwest Roofing, Las Vegas, was contracted to waterproof the stadium’s footprint and install the cutting-edge roofing system, which encompasses a transparent roof and surrounding membrane. 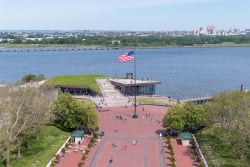 More than that, it allows millions more visitors to enjoy the Statue of Liberty experience and be inspired by her history and message of freedom and opportunity. While the Statue of Liberty remains New York’s most iconic monument, the museum housed in its base had long proved inadequate for the thousands who visit each day.

The John F. Kennedy Center for the Performing Arts is a historic venue, standing on the bank of the Potomac River in Washington D.C. The facility recently underwent a $250 million expansion called The REACH expansion, which is a true state of the art project.

The project incorporates an expansive landscape over structure containing a technical masterpiece: a three-dimensional cork-screw green roof for the public area of the project as never seen before. It was the result of a unique collaboration between designers, contractors and material suppliers. The Steven Holl Architects-designed project opened in October 2019 and has already achieved LEED Gold certification. 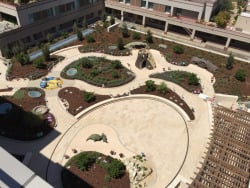 Palo Alto, CA. (November 26, 2019) There are many reasons to incorporate a green or living roof into a design, including energy conservation, water management, and financial benefits.  For one project in Palo Alto, California, the benefits of having a green roof transcended financial gains, and instead served a higher role. 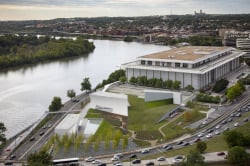 WASHINGTON, D.C. (November 14, 2019) The Kennedy Center’s first expansion since its opening in 1971, the REACH is the John F. Kennedy Center for the Performing Arts’ historic, $250 million expansion project.  A living memorial for President John F. Kennedy, the REACH is envisioned as a 21st-century cultural campus and arts incubator and the 4.6-acre site is located on a former parking lot for buses.

Visitors can walk through a 35 ginkgo tree grove anchoring the south end of the campus (Kennedy was the 35th U.S. president), watch a free outdoor simulcast performance projected on a wall, or stroll to the reflecting pool and mahogany landscape deck which is built in the same dimensions and mahogany boards of Kennedy’s WWII torpedo patrol boat, the PT109.

Below are the most up-to-date press releases & media coverage from American Hydrotech. Click on a headline, thumbnail or "Read More" link to continue reading or to save a PDF copy to your computer. If you have any questions or would like to request more information, please contact our Customer Service department.