The REACH - John F. Kennedy Center for the Performing Arts

The John F. Kennedy Center for the Performing Arts is a historic venue, standing on the bank of the Potomac River in Washington D.C. The facility recently underwent a $250 million expansion, transforming a former parking lot into an avant-garde arts complex with classrooms, 10 interior stages, performance and rehearsal space.

Nearly the entire facility is capped with a vegetated green roof. The buildings have a footprint of 72,000 sq. ft., and 69,000 sq. ft of that is covered by green roof. The slope of the vegetation varies from virtually flat to nearly vertical.

Designed by Steven Holl Architects, LEED certification was established as a priority early in the planning phase. Understanding the building’s end-use, the surrounding site, and energy performance were key in ensuring the building would be sustainable.

85,000 sq. ft. of the project is protected with Monolithic Membrane 6125. Among the most challenging aspects of the green roof were several areas where the roof slope geometry twisted from flat to vertical like a corkscrew.  Four complex shaped roof areas were referred to as “Swoops”. The slope of the large Swoop varied from 0 degrees to 90 degrees. Hydrotech also took the lead in using its GardNet slope stabilization assembly that is ideal for these complex, 3-dimensional roof deck shapes. Ultimately, four “swoops” were created at various areas on the building roof. 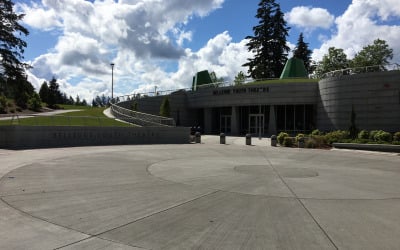