When investor/philanthropist Paul G. Allen decided to build a museum inspired by rock legend Jimi Hendrix, he wanted the structure to reflect the dynamic quality of music - a building that expressed the originality of Hendrix-style rock ‘n roll. The defining factor of EMP’s legacy was Allen’s partnership with a distinctly avant-garde architect, Frank O. Gehry, the very one responsible for the titanium-clad Geggenheim Museum in Balbao, Spain.

Gehry's design for Experience Music Project has been described in terms not typically associated with architecture - words like “visceral” and “organic”. Paul Allen and his co-founder Jody Patton coined the term “swoopy” to describe the structure’s candy-apple colored curves.

Swoopy indeed, this $60 million capital project consists of 140,000 s.f. of continually alternating vertical, horizontal and inverted slopes. There is neither   flat surface nor a discernible rooftop – a fact that amplified the engineering challenges considerably. Among the project’s priorities was waterproofing – millions in multimedia technology and thousands of invaluable artifacts would need lasting protection from Seattle rain.

Due to the product's seamless coverage and ability to conform to irregular horizontal and vertical surfaces, MM6125® was chosen to waterproof the  shotcrete shell. A self-healing hotapplied rubberized asphalt composed of 100% solids, MM6125 bonds to the substrate with a tenacity that has proven its effectiveness over 40 years, on more than a ½ billion square feet worldwide.

The planning and building of EMP demanded consistent dedication from Hydrotech sales and technical staff, all of which translated into high-performance  waterproofing coverage of this truly one-of-a-kind project. 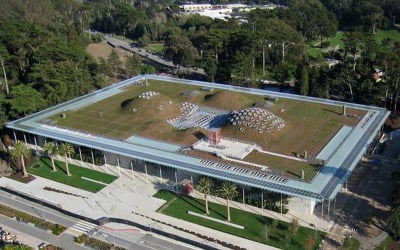