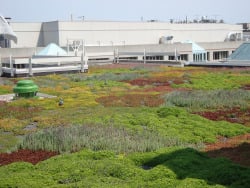 (August 5, 2016) Excerpt from an article in Stormwater Magazine.

The rainwater is retained until the assembly is completely saturated, and excess water is slowly released from the roof into the site’s stormwater system. Stormwater runoff volume also is reduced because of evapotranspiration, which cools the surrounding air.